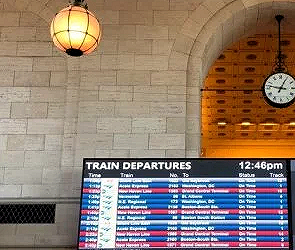 I picked up Tracy  from her work as a PA at Mount Sinai Hospital in Hartford, CT at 11 pm on a Friday evening and we headed to Union Station in New Haven to catch the midnight train to Baltimore for the AGLCA Looper Lifestyle Seminar in March 2015.  The trip was full of anticipation and excitement for me so sleep on the train was a rare commodity on this early spring night.  We arrived at Baltimore and got the hotel shuttle straight to the hotel.  We made it in plenty of time for the 9am start, so we went to the hotel restaurant for some coffee and a light breakfast.  As we were walking up to the buffet bar, a voice calls out hello to me.  I look at the couple eating their breakfast and it was Bill and Marylou of Ocean Commotion 2.  They are both PADI Divemasters from Enfield Scuba and I see them around frequently as I’m a PADI Master Instructor from Scuba Shack.  We didn’t know exactly what to expect at this first ever AGLCA event (for us), so it was great to immediately see friendly faces to start the day.  We spent the entire day with Bill and Marylou and since we were in the process of upgrading from a 24′ lake boat to a long range trawler, they were great with feedback, ideas, etc.

Kim Russo started the day with welcomes, some introductions, and a slide presentation of the loop.  Besides the Members who took the mike for their own perspectives, we also had presentations from Captains Chris and Alyse Caldwell and a presentation on boat buying from Curtis Stokes.

We were there especially for the presentation by Curtis and to speak to him about one of his listings that we had our eye on from our internet shopping.  His presentation extolled the advantages of the “Buyer’s Broker” concept and we looked forward to introducing ourselves to him when available.

Time came when we were able to sit down with Curtis and we described our interest in one of his listings in Fort Meyers, FL., a 1987 Tollycraft 44 Cockpit Motor Yacht, and a great loop veteran.  He immediately said that he was pleased with our interest in his listing, however, he would not come on board with us as our “Buyer’s Broker”.  At first we were surprised, then he explained that since it was not only his Firm’s listing, but he was also representing the Owners as their broker for the sale.  Somewhat disappointed, we were introduced to his associate Michael Martin and the disappointment was short-lived.   As the Looper Lifestyle Seminar was over for the day, Michael spent the next hour  interviewing us to learn our needs, wants, desires, etc.  Michael made arrangements to visit the boat and preview it for us and also to produce a drone video of the vessel and send it to us in April.    This video can be seen on the homepage of this website and on You Tube.  Michael’s ability to fly a drone for photography stunned us.  -tc

The long train ride back to Connecticut was filled with great satisfaction and anticipation of starting to take the steps necessary to fulfill our dream of retiring in April, 2017 and traveling America’s Great Loop!