Posted on September 2, 2017 by Nick and Tracy Civitillo

Tracy’s friend Jody and her husband Sol Goldenberg drive up from New Jersey for a night of swallow watching.  (Actually in this picture we are all texting each other and trying to figure out Instagram.  -tc) 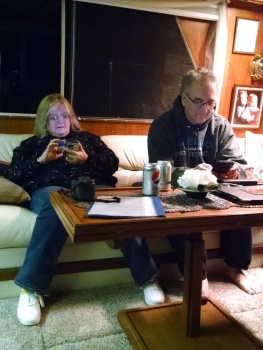 The weather forecast is iffy as there’s rain in the forecast, but the weather gods cooperated and we had a nice cruise.  On the way down Tracy took us off the dock and most of the way down to Goose Island.  Some of our neighbors at Chester Marina are always astonished when Tracy is at the helm because in their boats the women never drive.  We try to keep our skills sharp so we switch up the helm seat quite often.   We made our way down to Goose Island in plenty of time to anchor in a prime spot that we like just outside the channel and close to the island.  We appeared to be the only ones coming out for tonight’s show at first, but as sunset got closer, the entire viewing arena was packed including three tourist boats, The Becky Thatcher, Riverquest and the Connecticut River Museum’s Sailing Sloop.

The swallows were entirely up for their dance and once they started circling, the sky was consumed with Swallows for a good forty-five minutes.  Swallows came in, circled for a while, flew away for a while, only to return in greater numbers for the grand finale.  This time, though it appeared that most of the Swallows dove in unison, while a few stragglers had to come down alone as they missed the pack.  Oh well even when people get together, there’s usually one person or so that arrives late.  Sol and Jody were in awe of the tremendous number of swallows all dancing in the sky with such precision and unison.

After the show was over and all the other boats left we decided to play Scrabble in the solitude of the anchorage.  Only noise that broke our concentration was the electrical circuits that click whenever there isn’t sufficient draw on the inverter and it starts searching for amperage draw.  I think this is a flaw in our electrical set-up that I’ll have to spend some time researching as to why the obnoxious clicking occurs.

After Sol slammed us on the Scrabble Board, we turned in for the evening with Tracy, Sol & Jody planning on getting up at sunrise to try and catch the Swallow show in reverse.  Come morning, they were able to see all the Swallows fly up again in unison and disperse in the Connecticut River Sky for the day.  The swallows leaving in the morning is even more miraculous to see.  Instead of gathering over an hour or so, at the break of dawn, with no other botas about, the birds rise in unison and start heading south.  We were on the bridge with  with a side window open (it was raining)and there were several times Jody and I actually ducked because we thought the birds were heading right at us.  -tc

Breakfast was huge bagels that Sol & Jody had brought from home for us to share.  They had been fresh baked on Saturday and even one day later, they were still as delicious as fresh baked.  Since they had a three hour drive back home (and they were six days away from their son getting married), we cleaned up from breakfast and made arrangements to head back home.

Nick was at the helm and starting the engines before Tracy starts the process of retrieving the anchor.  Port engine-check, starboard engine-check out!  Starboard engine wouldn’t start.  So we called BoatUS and started our checklist process to try and determine why she wasn’t starting.  Up came the engine room hatch and down Nick went to check all battery connections, battery switches, etc.  After all battery checks were made, next came the starter solenoid.  We had power on the hot side, but no power coming from the ignition switch up at the helm.  We remembered from past experience that when that happens, a jumper cable will bypass the solenoid and basically hotwire the engine.

Just as we were hotwiring our starboard engine, BoatUS showed up.  (They are soooo worth it!  it’s like AAA for boats.  And we have already more than made up for the membership fee, sadly to say.  -tc)    So I told the driver that we had started the engine and were ready to head back to Chester Marina.  He said that he was already on this call and that his responsibility was to get us safely back to our home port, so he would tag long behind us and follow us right back to our dock.  That way, if anything happened and the engine knocked off, he could come right alongside us and tow us the rest of the way home.  That’s emergency service!

As promised, he stayed in our wake and escorted us all the way back to our dock.  As usual, when our neighbors see Kailani coming around the bend in the creek, we usually get 4-5 dockmasters ready to assist us with lines.  This time, as people noticed the TowBoatUS escorting us, we seemed to draw a larger crowd.  We communicated with TowBoatUS and told him to lay back as we completed our 180 degree turn into and out of Springfield Yacht and Canoe Club to orient ourselves properly on our wall.  Bart, Brian, Kim, Ed, Chad, Jimmy and Buck were all on our dock ready to help with our lines.  We pulled Kailani smoothly up to our dock and secured her with our bow and stern lines and the two spring lines.  Once we were safely secured to the dock, Sol and Jody started working on getting their personal belongings together and ready for the drive home.

After they left, Tracy and I got Kailani cleaned up from the voyage and relaxed the rest of the afternoon.