Posted on November 5, 2017 by Nick and Tracy Civitillo

Tuesday is the day. On Monday evening, we both agree that Tuesday’s forecast is good to sail, with northeast winds at 5-10 knots and seas of 2-3 feet with acceptable periods. So Tuesday morning at 9:30 am we leave our wall at Chester Marina for the winter. Tyler and Jesse are there to see us off and we’re on our way. The Connecticut River is calm today and boat traffic is negligible (a cool Tuesday in November!) save for a couple of fishing boats as we get closer to the mouth.

Tracy has set up a slip for us at Milford Landing. She talked with Ray and he said there was power, but water was turned off already. However, we could pull up to his pumpout dock and pump our tanks and we certainly needed that! So even Long Island Sound was relatively calm with shallow rolling waves, and the winds just providing a slight nudge from the stern as we were nearly matching the speed. Everything was ordinary with no hidden surprises or experiences. Even for a cooler day, the flybridge was a nice greenhouse on this partly sunny day. 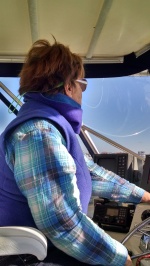 Tracy took the helm as we entered the harbor and guided us close to our marina. Ray had said he would not be at the marina, but just tie up at any available dock and the pumpout was between slips 15 & 16. Milford Landing has floating dock on the west shore and they also manage a series of floating docks, which are moored in the channel predominantly used by sailboats in season. As we approached, all the floating docks were vacant, however we entered on the port side of the floaters and the channel was actually on the starboard side. So Tracy gave the helm back to Nick and she called Ray again for some better detail on the location of the marina. Soon, we were tied up secure at slip #15 right next to the pumpout. The docks were very well built and Tracy handled the lines completely from onboard as she secured two lines temporarily onto two deck cleats. With no wind or current, Kailani just sat right there while we completed securing the lines and adjusting the fenders to our liking. By 3:00 pm Kailani was settled in for the night and the available daylight remaining gave us plenty of time for pumpout.

Somehow it evolved (I am very appreciative in this regard!) that Tracy handles the pumpout process. (The Queen of Poop!  -tc)   So I handed Tracy the pumpout hose while I went to hook up the shore power.

Here’s where our new adventure started! The shore power offered two 30 amp plugs and did not offer a single 50 amp plug, so I removed our 30 amp to 50 amp yolk and plugged our two 30 amp cords into the tower and turned power on to the circuit breakers. I proceeded onto the boat, checked the panel for incoming power and turned on the necessary circuits. Since it was a bit cool, I turned on the Salon heater along with the circulating pump while Tracy was still outside handling the pumpout. Soon afterwards, the circulating pump stopped (remember that this is the third new pump we have installed since July) and I failed to diagnose properly that is was actually the circuit breaker on the shore tower that tripped. I just thought that we were in for another replacement. So I tried to be calm and just rig up two space heaters we have on board. Bad mistake since each space heater draws 9 amps and all the electrical outlets run through the inverter, I  (We) had just overloaded the inverter I immediately found out that there’s a whole new way for me to generate smoke in the engine room!!!  (So much smoke billowing out.  This was my third run for the fire extinguisher.  Luckily no flame again, but very unsettling and frustrating.  We had made it a whole 25 miles!  -tc)

We ended up turning off all AC current to the boat and most of the DC current on the boat. We had a refrigerator full of food stocked on Monday for the trip, so we switched the refrigerator to DC source and also made sure all four bilge pumps were powered and then we packed up some clothes and Frankie, called Uber and checked into the Red Roof Inn of Milford for the cold night.

First thing Wednesday morning, I got on the phone and called Connecticut Diesel and Marine. Paul Walker told me he had a technician who he was just sending out to another job, but that he would divert and have the tech come to us within 15-30 minutes. Also, he was scheduled to check out a boat job near where we were docked, so he would stop by also and help diagnose the issue. 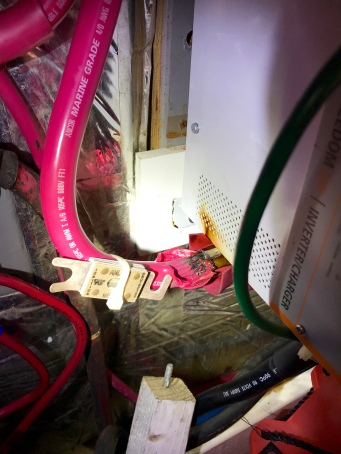 I had already sent him some pictures of the positive cable roasted right where it comes out of the inverter and what I thought he would need for parts to complete the cable replacement. He and Pete showed up as scheduled and worked professionally to get the roasted cable replaced. Everything was going as planned until the new cable was completed, power was restored, and we could not get the inverter to power up! This seemingly simple fix was turning into a fiscal nightmare and threatening to cancel our migratory plan. Paul gave me some options including two marinas locally that might have space for us at this late date for haulout and winter storage, allowing Paul the entire winter to complete the necessary repairs. We were really starting to think that this whole boating thing was not meant for us. Paul and Pete left us to think about our options and we agreed to let him know which way we would go after doing some soul searching. One thing was certain, in spite of their extreme convenience, we were getting tired of having to call Uber every time we had to get from the Red Roof Inn to the marina or vice versa. So we decided to get our friend Kim to come down, pick us up, and drive us to Chester Marina to pick up our car that we had left there. On Friday, Kim met us at the Red Roof Inn, took us over to the boat where we took some additional clothes and other items off the boat, emptied the fresh water holding tank to prevent freezing issues, inspected to dock lines, and headed back to Simsbury for the weekend to make some important decisions.

In spite of a rental cottage on the beach in Myrtle Beach, South Carolina looking very appealing, and with mild confidence that if we repaired Kailani and continued on now, weather would start to be an issue, we made a firm decision to replace the inverter now and continue on our journey. (In all honesty, we just about gave up.  We made a “firm” decision after two days of back and forth about whether to south go by car or try to fix this now and go by boat.  We looked at rentals in the south and they were very doable, but when it came down to it, I guess we are too stubborn to not keep trying.  -tc)  So we called Paul to let him know that we would meet him on the boat first thing Monday morning and the inverter would get replaced. Everything went smoothly on Monday and we were now ready to get back on the water, but we had to get driven to Milford from Simsbury so we didn’t end up leaving our car in Milford for the winter. Tracy reached out to one of our best friends Mike Uccello and he graciously agreed to drive us back down to the boat Monday evening so we could return to our migration.