Leland Marina in McClellanville on Jeremy Creek is our destination for today. Jeremy Creek is at Mile Marker 430 on the ICW and there’s bad shoaling from 430 to 435 on the ICW so it’s imperative to hit this area at high or rising tide. So in analyzing the upcoming tide charts we had determined that with a high tide at 6:41 AM and again at 7:13 pm on Wednesday, the best thing to do on Tuesday is to get to Leland and leave Wednesday morning right at the early morning high tide. Then we have our best shot at managing the shoaling areas on Wednesday.

So our cruise to McClellanville will be 24 nautical miles and three hours of cruising. We wake up with our mandatory cups of coffee, walk Frankie, and prepare for departure. Chris comes out of the Dock Master’s office while I’m removing the water and power from the dock and as Tracy takes Kailani off the dock, Chris hands me the lines. Tracy backs away flawlessly from the dock, turns 180 degrees and heads out of the Sampit River into Winyan Bay. Our pre-cruise preparations from Waterway Guide and our ICW

Guidebooks all showed no navigation alerts to be concerned with nor any bridges to open, but as soon as we turned south onto the ICW off Winyah Bay, we were looking at a floating swing bridge one mile ahead of us. Fortunately it was in the open position and there was a big sign indicating that yellow lights would flash during a closing, so we did not see any yellow lights and proceeded very cautiously thru the floating swing bridge connecting the two sides of the Tom Yawkey Wildlife Center.

There was some shallow water when we crossed the North Santee River and the South Santee River, but other than those two areas, we had good water depth for the majority of the cruise. We cruised through twenty miles of the Santee Coastal Reserve with virtually no hint of civilization in sight for most of those twenty miles.

We were only accompanied by another pod of very friendly bottlenose dolphins and lots of birds, pelicans and ducks. The terrain was mostly flat with sparse areas of forestry while the majority was marshland and old rice plantations.

Oh yeah and way off in the distance across the flatlands, we could see the Cape Romain Lighthouse(s). There are actually two lighthouses there, one that is sixty five feet tall built in 1827 that was replaced in 1857 by another lighthouse at one hundred fifty feet tall and both of them survived the destructive Hurricane Hugo. The older, shorter lighthouse is the oldest of its kind still standing in the United States.

By 1:30 pm Tracy was turning to starboard into Jeremy Creek for the short ride up to the marina. Once we were at the dock we were greeted by the dockmaster and our neighbor to the stern from ‘Tiki Queen’.

He pulled out his boat card and we were instant friends. His card said he was Leland McClellan so I figured he was the owner of the marina and from the family that the town was named after. I quickly learned that I was half right. He was not the marina owner. In fact he was docked here for the next month while waiting for his wife to return from teaching nursing back home in Galveston, Texas. He grew up here, but moved to Texas forty years ago for his career and now he and his wife are on America’s Great Loop and stopped here to see old friends before heading north at the end of April. That means we will meet again on the way north. We kept talking with him while we cleaned Kailani from the journey and then he offered to drive us to the local restaurant for a bite to eat. He had already had lunch but he would sit and have a beer anyway. So with the restaurant closing at 2:30 pm we needed to get moving, so we jumped into his Ford Fusion rental and off we went to T W Grahams. We walked in at 2:28 pm and they couldn’t have been more gracious to seat us and serve us. Leland kept telling us about the town and after we had a nice home cooked sandwich, Leland gave us the tour of the community showing us the house he was born in, the house he lived in while going to school and every other house that housed relatives from yesterday and today. 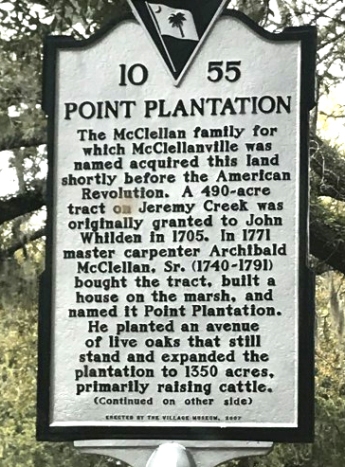 He also showed us the museum, the library, the progressive education school and the cemetery. He said his wife told him he’s the Harbor Host for the area. I haven’t met her yet, but I agree! Before returning to the marina, he offered to take us to any store we needed, but right now, we’re fully stocked, but the offer was much appreciated.

After returning to Kailani, we did some more cleaning and got ready for tomorrow’s very early start. We plan to pull away from this dock by 7:00 am, which is right at the high tide for this area giving us the most water for the passage thru the ‘McClellanville Shallows’.