Tracy prepares a pancake and sausage breakfast for our Coral Seas guests, Joy Brewer and Marc Robinson. We’ve had a great time with them on board and it was great to catch up with our separate adventures to date. They leave shortly after breakfast headed for Annapolis where they’ll pick up their truck and head out to Montana. The rest of Sunday is spent enjoying the Southport area. Of course, we have to go fishing and we strike out on that score. Dinner time comes and we head over to The Frying Pan again for another nice meal.

Monday:         Steve Wallace shows up this morning with two guys to work on our list of issues. J deals with the electronics while Steve (our old friend from the black water tank repair) works on the transmission issues. Both men review the issues and with a few adjustments of the existing equipment confirm that nothing is broke on Kailani and we should be good to go. That’s a relief that our transmission works! We were concerned about that possibility. In the afternoon, we borrow the Zimmerman Marine courtesy car to head over to the Super WalMart for some groceries. Good thing the courtesy car is a pickup truck! We’re now stocked for a long time.

Tuesday:         Small craft warnings, gale force warnings, heavy rain and thunderstorms in the forecast, etc make Tuesday a good day to stay in port. The rains start Monday night and continue into the morning on Tuesday and we find Kailani has a few leaks whenever the rains come down horizontally! While we’re cleaning up the few water spots, Tracy hollers for me to come outside and look at the surface of the water next to Kailani. A small alligator is swimming by like he owns the place (who’s going to challenge him huh?).

Wednesday:         Even though it’s only 20 miles up the Cape Fear River, we really love Joyner Marina in Carolina Beach, so today that’s our goal. Actually, there’s a strong current heading south on the river and the winds are coming out of the south and clashing with the current. Whenever that happens the Cape Fear River gets pretty choppy, so we hang tight at Southport Marina into mid morning and wait for most of the tide-driven current to change. We leave at 10 am and only have about a half hour of chop before the seas calm down for the rest of the cruise. Of course we still have the obligatory sportfish cruisers that kick up the waves higher than Mother Nature, but we’re used to them. 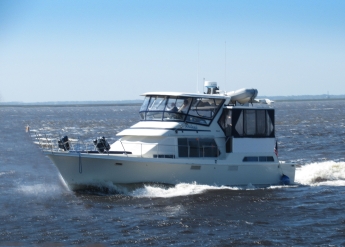 An added bonus today is the friendliness of AGLCA members. It happens today that Phil Barbalace is cruising south down the Cape Fear River to get some upholstery work done on his vessel and while cruising south, he was passed by about twenty loopers cruising north and he took out his camera (he’s a retired semi professional photographer) and got a few shots of each vessel underway including Kailani, then proceeded to reach out to each of us and forward the shots to us for our use. Now there’s a benefit of membership that’s not in the propoganda.

We arrive at Joyner Marina by noon and every one was busy, but a fellow looper noticed us pulling in and as we were easing Kailani up to the dock, Ann Marie Tyrell was grabbing the lines from Tracy and helping us secure to the dock. She even stayed and helped us hook up water and electric. What a tremendous value to belong to such a friendly, helpful community of boaters. Later in the day, I got a chance to talk with J W Thomas and he told me the marina had been sold and the new owners were using some resources to fix up and remodel the whole marina and it was great to find out that J W, Taylor and the rest of the staff would be able to keep their jobs. This was great news for Joyner Marina.

Thursday:         Today, we plan for our first anchorage on this loop adventure. Our planed destination is Sloop Creek in Topsail Sound. It’s one mile in from the ICW in protected waters. We start with a pumpout at Joyner Marina and say goodbye to JW and Taylor and wish them luck with the new ownership. Then we proceed north and get in line with seven other boats at the Wrightsville Beach Bridge. We could have made it without waiting, but the first two trawlers were sort of blocking the waterway, so we just settled back and waited in line with the others. When we got to the Figure Eight Island Bridge, we radioed the bridge tender and the two boats ahead of us that we had plenty of clearance to not wait for the opening, so the two trawlers gave us room to proceed while they waited for the bottom of the hour opening. After that we just had a few areas of shoaling to deal with, but we print out the appropriate navigation alerts each night prior to a cruise and carry them on the bridge for the mate to read to the Captain as they occur. So we’ve worked out a very safe and do-able system. Tracy brings us to our anchorage and I drop the anchor while Tracy sets the bite from the helm (reverse on the engines and pull the anchor deep into the bottom. Once we’re set, guess what comes out? Correct, the fishing poles.

Tracy catches two sharks, a shovel head and a sandbar shark, and also a whitefish. We have a huge salad for dinner, run the generator for a while to charge the batteries before turning in at 9:30 pm (anything around 9 pm is referred to as ‘looper’s midnight’)

Friday:         We set our plan for an early morning departure to catch the high tides and the top of the hour opening of the Surf City Bridge (four miles ahead of our anchorage). So we raise the anchor at 7:30 am and make the bridge by 7:55 am. That’s perfect planning. After that, we have more shoaling to deal with, the Onslow Beach Bridge to open and the Camp Lejuene live fire range to check out. I had called three times the previous evening and once early this morning prior to departure and didn’t get a dial tone. So at the Onslow Beach Bridge while we were waiting, we radioed the bridge tender and asked if he knew the range status since his location was literally two tenths of a mile south of the beginning of the range. He said he had been hearing fire all morning but to him it sounded mort south, than on the ICW. So while we were waiting, Tracy gave the phone a try and found out they were definitely firing today, but not across the ICW, so it was open for us to proceed. We pulled into Dudley Marina at exactly noon after our 33 mile trip and everyone here is still friendly and accommodating, just like in late February. They gave us the courtesy car for the evening and we went out for an early dinner, then the 5:00 pm show of the new movie “Chappaquiddick”, the story of Ted Kennedy and Mary Jo Kopechne.

Saturday:                  We’re headed back to see some good friends in Oriental, NC today. It’s a five hour cruise, so we leave a bit early from Dudley’s Marina, 8:30 am (early for us at least). Seas are calm and Bogue Sound has a parade of trawlers and sailboats all headed north. Bogue Sound is famous for a tight channel and now we’re dealing with some shoaling in spots that make staying in the channel even more critical. But with good lookout from both of us and following the electronic chartplotter exactly, we make it safely thru the 22 mile stretch of water. Before turning north towards Core Creek and Adams Creek, we must negotiate the port of Morehead City. By now, we’ve passed most of the northbound trawlers and sailboats, but we’re confronted with a swarm of pleasure boaters and fisherman in the port. At one point Tracy was simply looking forward, not to the port or starboard or aft, just forward, and counted 28 vessels either motoring or anchored/fishing right in the channel! The count of 28 included one Marine Patrol vessel too. Well we negotiated this swarm of vessels and once we turned north, those vessels were but a mere memory and we were again alone on the ICW. When we came out of Adams Creek to cross the Neuse River we opened up the throttles to clean out the pipes and give Tracy a chance to look for some nuisance water leak we’ve been looking for. I think it might be one of the deck scupper lines may be clogged and holding water. Soon we enter the Oriental Harbor looking for one of the slips on the two town docks, but both docks are full, so we radio Oriental Marina and Inn and they are waiting on the dock for us to tie up. Good thing we got in because by the end of the day, all the slips were full. We noticed Tiki Queen was docked a few slips down from us and I went over to spend some time with Leland and Karen McClellan, then I went over to Inland Waterway Provision Company to say hello to Pat and Theresa.

Pat was there and told me about the pig roast at the New Brewing Company. Leland had mentioned that he and Karen were going also. So we walked over at 6pm and for the second time at a pig roast in North Carolina, we got there after all the pig was gone! Oh well, dinner at the Toucan Restaurant and a quiet evening aboard Kailani ready to move tomorrow to Belhaven.