Sunday:         Having made a decision to stay inside and move, the weather is acceptable for an inside passage today. High tide in Atlantic City will be 1:08pm so we plan for a 10:00am departure and give ourselves 3 hours of rising tide and 3 hours of falling to slack tide for the trip to Toms River. We start the morning with a pumpout because we know tonight will be at anchor and tomorrow should be at Great Kills Yacht Club and they don’t have a pumpout either. So we decide to start this week with empty holding tanks. With that accomplished, Tracy takes us off the dock at 9:45am and we’re on our way. This leg of the NJICW is supposed to be better for depths and less ‘no wake zones’ and it is for the most part. We still see some shallow depths on the charts, then find that they’re actually deeper thanks to dredging, however, it’s still a bit tense and we slow down until we verify that the depths are adequate. Both of us are amazed that we’re getting used to seeing 7’ on the depth sounder! We make very adequate time up to Toms River and successfully pass through Barnegat Bay Inlet and it’s currents. As we’re approaching the entrance to Toms River, the sky turns black and a wall of rain drops down with some increased winds and all of a sudden, more shallow depths at the mouth of the river, so Tracy quickly gets on the phone and calls the nearest marina, Pier 1 Marina and Motel and asks if they have space.

It is, after all, 4pm on a Sunday afternoon and some marinas might be closed for the evening. But here, they answer and proceed to give Tracy information for the motel rooms. She explains to them that we are in a motor vessel and we do not need a motel room and the lady says she knows nothing about the marina and she’ll have to put her husband on the line.

Eventually Tracy gets it all straightened out and John talks us into the marina where he’s waiting for us to hand him the lines. Turns out he knows only slightly more that his wife, but he tries very hard to assist us. Their marina docks are fixed docks with pylons that are slightly higher than the dock (about a foot) so as I’m nestling Kailani into the very tight nook he made for us to dock, our gunwale goes past the dock edge (its higher than the pylon) and the hull of the boat crunches one of the pilings. We both hear the fiberglass crunching and we can only hope I haven’t but a large hole in the hull. As we finally get her tied up and we step off the boat onto the dock we are both extremely relieved to learn that the piling crushed the engine room vent and nothing else. This is completely replaceable and we will fix it when we get back to Connecticut.

On the property is a Japanese Sushi restaurant, so we complete our registration paperwork and take a nice break enjoying some General Tso’s Chicken and Peking Duck. We now have some great leftovers for one of the upcoming evenings at anchor. Our dock didn’t have power, so we spend the evening quietly like we’re at anchor. We monitor the battery levels and the power usage and just before turning in for the night, I set up the coffee pot, but I cannot use the auto-brew button because I’ll have to turn on the generator in the morning before starting the brew.

High tide tomorrow morning is 5:12am so we plan for a 7am departure for best depths.

Monday:         As described, I get up at 5:27am, fire up the generator and start the brew process. By 6:30am we’re both on deck starting the departure process. We are tucked into a very tight dock space and we need to twist the boat against the slight wind to get out, so we take advantage of the port side breast line that Tracy rigged yesterday and use is to pivot Kailani out of the slip without crushing anymore parts of the hull! At 7:15am we’re officially on our way to Staten Island and the Atlantic Ocean. But first we must negotiate the last 15 miles of the New Jersey Intracoastal Waterway and a 3’ railroad bridge just before the Manasquan Inlet. The last leg of the NJICW is the Point Pleasant Canal, which can have some strong currents either with you or against you. Today we idled through (3.5 knots) and were actually going 8.3 knots speed over ground! We’re sure glad the current was with us today and not against. Once we were out of the Point Pleasant Canal, we saw that the Breille Railroad Bridge was open and we had a clear shot to the ocean. Oops, I forgot to mention the two extremely large party fishing charters sitting right at the mouth of the inlet. We couldn’t consider going behind them unless we wanted to shear off 30 fishing lines, so we made our way across their bows and they apparently accommodated us.

The ocean pass was relatively calm with 2-3 foot following seas with negligible winds and we were crossing Raritan Bay headed into Great Kills Harbor by 12:30pm and tied up at the docks with help from AGLCA’s newest Harbor Host of the Year, John Calascibetta before 1pm. After some greetings, pleasantries, etc. John offered to drive us to our favorite Italian supermarket in Staten Island, Frankie and Sal’s Market where we stocked up Kailani’s galley with some of our favorite Italian delicacies.

Galley’s stocked and we should be back at Chester Marina before the end of this week. Life’s good!

Tuesday:         Hell Gate slack tide is 9:30 to 10:00am so figuring a 2 hour 30 minute cruise to get to Hell Gate, we plan for a 7:00am departure and even if we go over a bit, we should still be good. And as plans would have it, we actually are pulling away from the Great Kills Yacht Club docks at 7:15am with Tracy at the helm and I’m cleaning up the lines and fenders. Tracy takes us out into Raritan Bay and we head towards the Verrazano-Narrows Bridge. 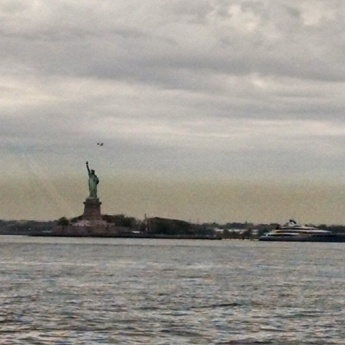 Commercial traffic today is very active in New York City harbor and we must stay diligent of extremely large vessels and the wakes of the ferries. We still get kicked around a bit and Tracy later learns that one set of ferry generated waves actually knocked the fluorescent bulb out of the fixture above the galley stove!. Anyway, we negotiate the lower harbor, cruise past the Brooklyn fishing pier that’s used in the Blue Bloods TV series, Governor’s Island and Roosevelt Island. Just as we are entering Hell Gate, there’s a very slow moving tug and barge ahead of us and we have to slow down. It’s not recommended that vessels negotiate the Gate slowly because the extra horsepower is helpful to combat the currents, but since we have times it perfectly today, the Gate is extremely docile and once we are out of the double ‘ess’ turn of the Gate, we call the tug for permission to pass on his port and we’re off towards Long Island Sound. First we again pass right by Riker’s Island and the flight path for LaGuardia International Airport. I love cruising right under commercial jetliners that are seemingly hanging in the air as they glide in for touchdown.

Long Island Sound is nicely calm today and the visibility although diminished somewhat, is still 6-8 miles, so we cross to Port Jefferson for an anchorage in the bay adjacent to the ferry. Just as we are approaching our anchorage, Tracy must get wet as she works the anchor and snubber line to drop anchor. It’ll rain until about 6:00 pm then clear up for the overnight. Ever since we came out of the East River and into Long Island Sound today, we’ve been able to see the Connecticut towns of Greenwich, Norwalk, Stamford and right up the line to Bridgeport, so we know we’re so close to home we can smell it (what the heck does that mean?). Tomorrow should be sunny and low winds for crossing the sound to Connecticut. We called Tyler at Chester Marina and told him we’ll be docking tomorrow in the mid-afternoon and he’ll be waiting on the dock for us to hand him our lines. So after leaving our home port on November 7th, 2017, we’ll be back home on May 23rd, 2018, a little more than six months later.

Wednesday:         This morning starts around 4:00am for some reason. Both Tracy and I wake up and can’t fall back asleep. It must be the anticipation of getting back to our homeport this afternoon. So I fire up the generator and brew today’s pot of coffee. By the time the coffee’s done, Tracy is planning a strategy to get some fishing in prior to our departure. Besides, I’m watching the ferries depart and come into the harbor and I want to time our departure to not conflict with the ferry schedule. So 8:00 am works for both of us. We pull up the anchor and leave the harbor to find Long Island Sound covered in fog.

Oh well, cruise by instruments again for 5 hours across the Sound. We were 100 yards from the Old Saybrook Light and could only see it on the radar! Surprisingly, as soon as we turned into the Connecticut River Inlet the fog lifted and our last hour up the river was beautiful, clear and familiar. Our timing today gave us a current push across the entire sound but it also gave us a head current up the river and we reached Chester Marina at exactly dead low tide. So there was very little water depth in the Chester Inlet, but there was also no current and at exactly 2:00pm we nestled Kailani up to our regular slip #26 and Tyler was there to grab the lines from Tracy. Six full hours on the water to get home including 5 hours of fog was all worth it. It’s so good to get back home and know we’ll be here for 2-3 weeks getting necessary stuff out of the way before we head out again for the long leg of the loop. Most people say the loop is approximately 6,000 nautical miles. Well we’ve completed 1/6 of that since starting our loop in Savannah, but since leaving Chester Marina last October we’ve been on the water for 28 weeks, cruised 2,136 miles, stayed at 50 marinas and two anchorages. We’ve met some great people at those marinas, some great people with AGLCA burgees and ate at some awesome restaurants in small towns along the way. The best part of all this is we have another year of experiencing more great marinas, more great people and more great small-town restaurants.

All this talk of restaurants is making me hungry, so we get the bike out of the sundeck and ride over to Moravel’s Pizzaria for dinner. Tomorrow we’ll start working on our responsibilities around the boat and back home.

Thursday:         We spend the day at the Chester Marina saying hello to everyone that’s here and making arrangements for Tyler to haul us out, paint the bottom and replace all the zincs. Nick, Dede, Natalie and Brianna come down to pick us up and bring us home. We have dinner together, then it’s back home for a while.

Friday:         Yard work and some in house chores take up our days going forward.